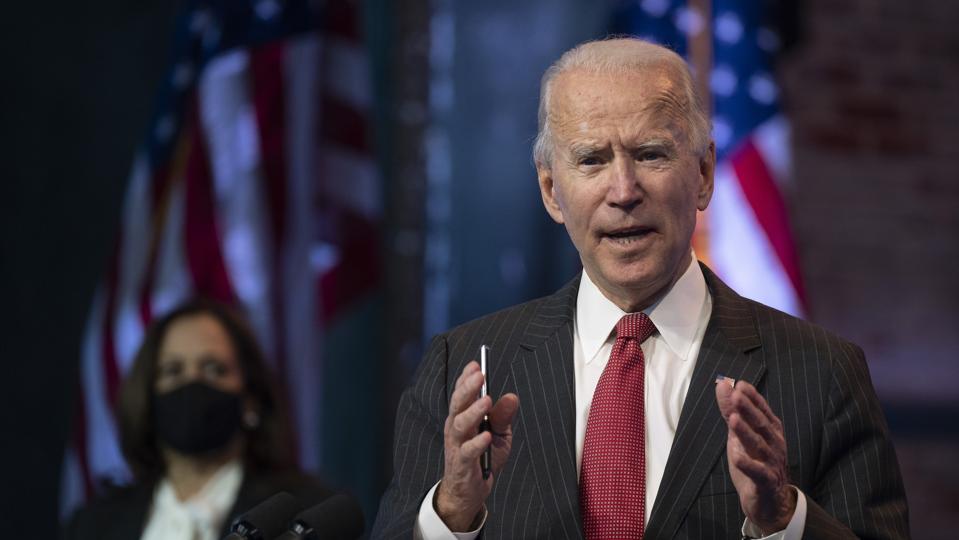 US President-elect Joe Biden speaks after a meeting with governors in Wilmington, Delaware, on … [+] November 19, 2020. – Biden said today he would not order a nationwide shutdown to fight the Covid-19 pandemic despite a surge in cases. (Photo by JIM WATSON / AFP) (Photo by JIM WATSON/AFP via Getty Images)

According to the Associated Press, Biden now has 51.1% of the national popular vote to Trump’s 47.2% – a margin identical to Romney’s 2012 defeat – a margin only expected to grow as New York continues to count absentee ballots.

Trump frequently mocked Romney – one of the GOP’s most prolific Trump critics – for his loss, describing it in a tweet just on Friday as a “slaughtering” after claiming during the 2016 race Romney lost “by a lot” in a race he “should have won.”

“Romney lost so badly,” Trump said during an interview with Fox News host Sean Hannity in 2016, after Romney denounced him as a “phony, a fraud,” calling it “one of the great defeats in the history of presidential politics.”

Biden is also set to win 306 electoral votes to Trump’s 232, identical to Trump’s electoral college victory in 2016 (though ended up being 304 to 227 due to faithless electors), which he described in Dec. 2016 as a “massive landslide” win.

“I guess the final number is 306 and [Clinton] is down to a very low number,” Trump told Fox News host Chris Wallace in an interview, with his then-campaign manager Kellyanne Conway boasting, “306. Landslide. Blowout. Historic.”

Biden was able to win back rust belt states – Michigan, Wisconsin and Pennsylvania – that were once described as the “blue wall” before they swung for Trump in 2016. Biden also won back the single electoral vote from Nebraska’s 2nd congressional district for the first time since 2008 while also winning Georgia and Arizona, the first time a Democratic presidential candidate has done so since the 1990s.

56.88%. That’s the share of the electoral vote Biden is slated to win. His victory ranks 46th of 59 U.S. presidential contests for percentage of electoral vote won. Democrats have frequently touted the fact that Biden is on track to win more than 80 million votes, by far the most of any presidential candidate in history thanks in large part to a projected 66.5% voter turnout rate, according to the Washington Post.

Trump has thus far refused to concede despite his clear defeat, instead launching legal efforts and pressuring officials in key states in an effort to overturn the results. “He only won in the eyes of the FAKE NEWS MEDIA,” Trump tweeted Sunday after appearing to acknowledge Biden’s victory. “I concede NOTHING! We have a long way to go.”