Small stocks are outpacing larger companies by the greatest amount in years so far this month, underscoring investors’ bets on Democrats gaining control in Washington and ramping up spending to support the economy.

Despite this week’s slide, fueled by rising coronavirus cases around the world, the
Russell 2000
of small-cap companies is still up 3.6% in October. That compares with a 1.6% drop for the S&P 500 and would be the largest such outperformance for any month since November 2016, the month President Trump was elected, according to Dow Jones Market Data. The Russell is outpacing the
Dow Jones Industrial Average
by 7.6 percentage points, which would be the largest monthly gap in more than a decade.

In the past week, the Russell and S&P are down about 4.2%, while the Dow has fallen 6%. The Russell has led this month even though smaller companies would be hard-hit by any new lockdown measures in the U.S. Earnings at these companies tend to rise and fall with the performance of the economy, but investors are anticipating that a victory by Democratic presidential nominee Joe Biden will lead to larger spending programs on everything from infrastructure to renewable-energy projects.

Similar wagers were made four years ago after Mr. Trump’s surprising victory, when investors bet that spending on infrastructure programs and deregulation would support small-caps. Many of those wagers unwound after a large infrastructure bill never materialized, and small companies continued lagging behind their larger peers as they have for much of the past decade. Since the 2016 election, the S&P has risen 55%, while the Russell is up 31%.

But nearly four years later, investors are favoring small stocks again. Many investors are hopeful that greater fiscal spending can offset corporate-tax increases or greater regulation that many investors expect in a “blue wave” scenario that sees Democrats win the White House and control in the Senate.

“There is this notion that the fiscal stimulus will overwhelm any tax implications that a blue wave might bring,” said Dan Cole, co-manager of the Columbia Small Cap Growth Fund. He has been increasing holdings of businesses like
Planet Fitness Inc.
and tax-software company
Avalara Inc.,
recently. 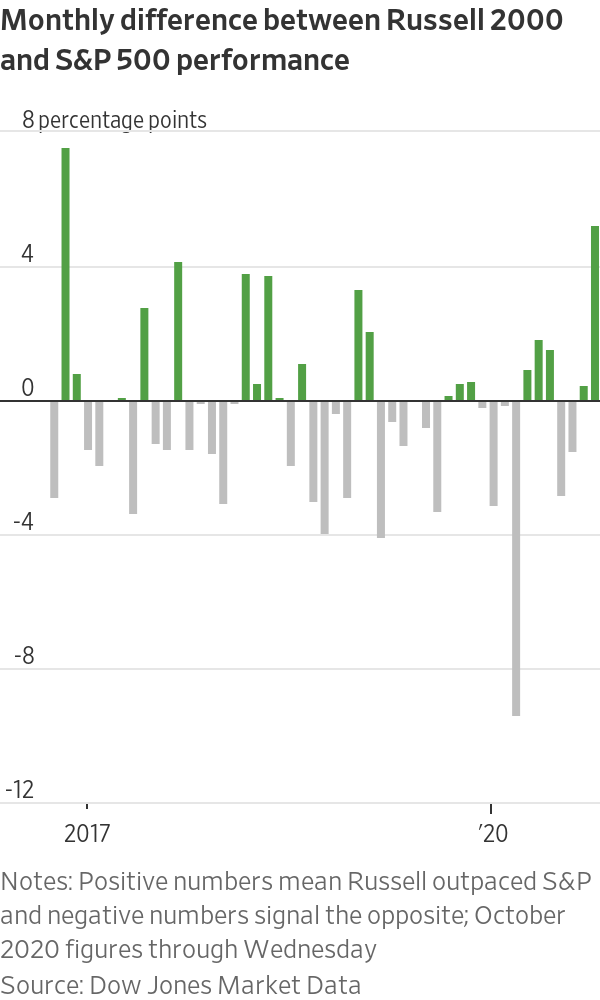 The Russell 2000 is narrowing some of its longstanding gap with the S&P, which has been lifted lately by large technology companies like
Apple Inc.
and
Microsoft Corp.
With a market value around $2 trillion, Apple is roughly as large as the entire Russell 2000 by itself.

The Russell’s recent outperformance comes with some investors wagering that more government spending will lift so-called cyclical companies, whose fortunes are tied to the economic outlook. Those include smaller companies, banks, manufacturers and commodity producers that tend to perform well as the economy exits a recession. In another sign investors are positioning for more stimulus, longer-term Treasury yields have risen lately, a development that signals traders are positioning for stronger growth and inflation. Bond yields climb as prices fall. 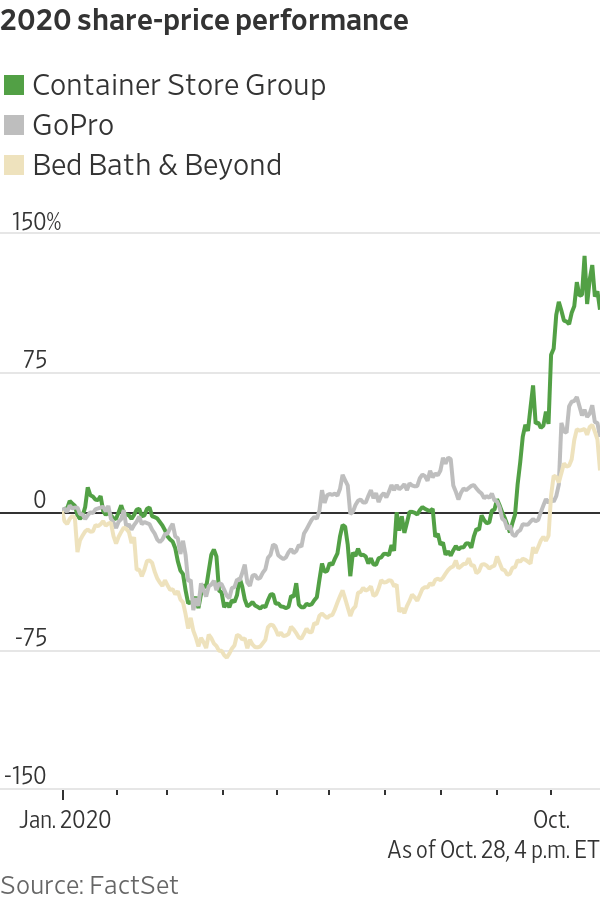 Some of the gains also mimic investors’ recent bets on larger companies that help with remote work and learning or leisure while stuck at home. Smaller companies lifting the Russell with gains of at least 30% this month include home-goods retailer
Bed Bath & Beyond Inc.,
home-fitness firm
Nautilus Inc.,
action-camera maker
GoPro Inc.
and organization-products seller the Container Store Group Inc.

Still, concerns about rising coronavirus cases and the prospect of fresh lockdown measures could pose a new threat to the outperformance in small-caps. Oil prices and shares of energy companies have been among the market’s worst performers this week, a sign investors are growing concerned about fuel demand and the economic outlook. Because profits for small caps would be hit harder by any new restrictions, many analysts say further stimulus measures will be needed to support the group until a coronavirus vaccine is distributed.

“The economy doesn’t have to get back to normal. We just have to have visibility into it and confidence that it’s coming,” said Jeff Buchbinder, equity strategist at LPL Financial. LPL recently boosted its view on small-caps to in line with its market benchmark from a negative stance.

Recent negotiations between Democrats in the House of Representatives and the White House over a second round of coronavirus stimulus have stalled, amplifying questions about whether the two sides will reach a deal after the election but before the next administration begins. 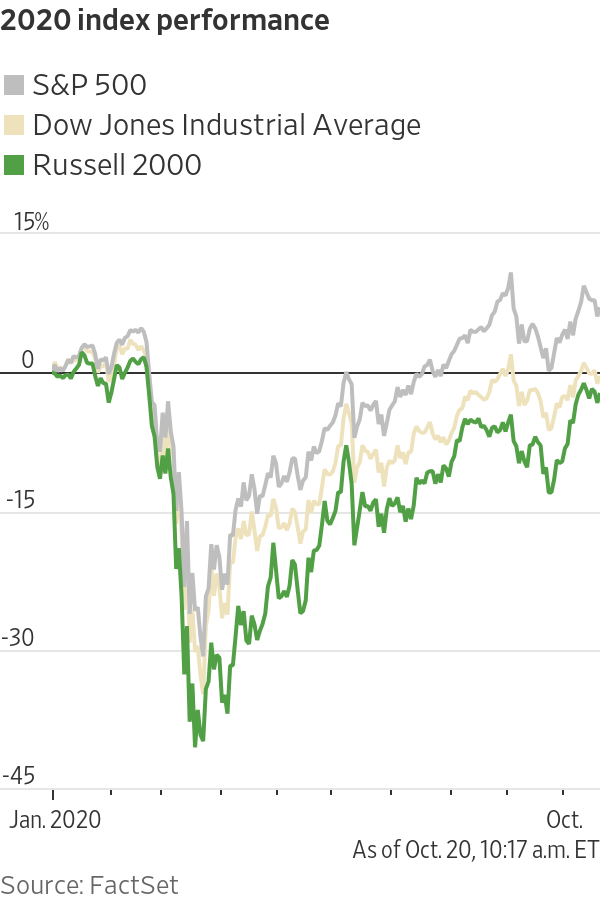 If a deal is reached, some investors think smaller companies are well positioned to climb further. The Russell 2000 last hit a record in August 2018 and has trailed major indexes for years, giving it room to rise in the months ahead, some analysts said. The Dow industrials hit their last record in February, while the more technology-laden S&P 500 and
Nasdaq Composite
reached new highs in early September.

Still, some traders caution that the economic recovery is already slowing down, a trend that could prompt investors to once again favor larger companies more directly tied to technology and remote working.

Some market watchers are also nervous about the role of increased speculation by individual investors using apps like Robinhood in driving the rally. Trading activity in companies with share prices below $5 has risen recently, and some investors have even been buying shares of companies on the verge of bankruptcy.

Rental-car company
Hertz Global Holdings Inc.
has been one of the Russell 2000’s top performers this month on a percentage basis, with its shares rising 60% to $1.78 after it lined up $1.65 billion in financing to carry itself through bankruptcy.

The stock market doesn’t decide who wins the election, but history shows that a weak performance in the run-up to the vote favors the challenger—and vice versa. WSJ’s Paul Vigna explains how market swings can affect President Trump and Joe Biden.

“Because small-caps are a riskier asset class, it is a good proxy for investors’ risk appetite,” said Angelo Kourkafas, investment strategist at Edward Jones. “You can definitely connect the two.” The firm is recommending investors generally trim positions in areas that have outperformed lately like large technology stocks and bolster holdings in areas lagging behind like small-caps.

Do you think small stocks will continue to outpace larger companies? Why or why not? Join the conversation below.