Welcome to Ars Cardboard, our weekend look at tabletop games! Check out our complete board gaming coverage at cardboard.arstechnica.com.

The 2020 global pandemic might seem like an ideal time for new board game app releases, but the increasing development time for more complex games means we’re going longer between initial announcements and final releases than we have before. Below, I’ve ranked my nine best new board game apps of 2020 based on app quality, play experience, and purchase price. I’ll give a quick honorable mention to Lorenzo il Magnifico, which I tested out a year ago when it was still in beta on Steam and of which I thought highly—but which I haven’t gotten to try in its newest version. 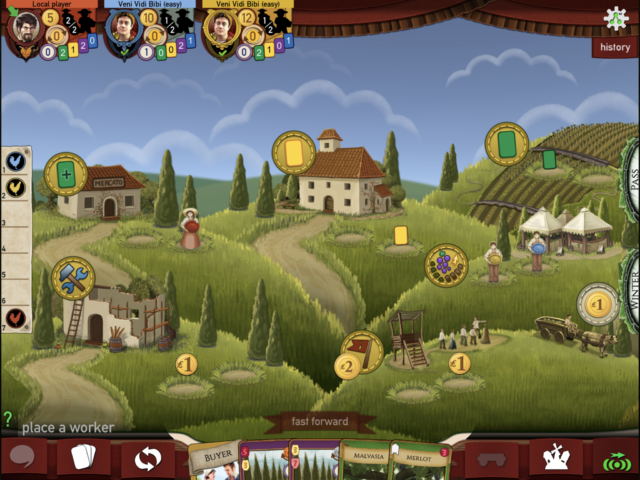 Enlarge / Placing workers in the spring to plant vines and build buildings, but sadly no grape-stomping.

The first game from designer Jamey Stegmaier (Scythe, Charterstone) gets the app treatment from Digidiced, whose apps all have the same general look and feel. You’re running a vineyard and placing workers in spring or in winter to plant vines, build up your farm, and run tours for money. It’s a relatively complex economic game at heart, and the app works well, but the tutorial here isn’t detailed enough; it might be better if you have some familiarity with the physical game. 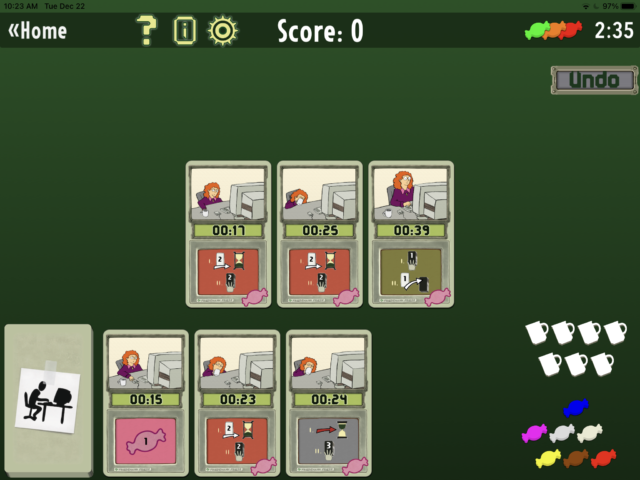 Friedman Friese is probably best known for his complex game Power Grid, but he’s produced a number of solo games, all of which have titles that start with F, including Friday (which has a pretty great app version). Finished! is a game of a single deck of 48 numbered cards, shuffled except for card #48, that you’ll try to sort into their order before you go through the deck 7 times. The cards also have functions like letting you put cards back into the deck and drawing new ones, or letting you retrieve the last two cards you’ve discarded. They might also show candies, which you’ll need to use the actions on other cards. It’s way harder than it sounds, which gives the game good replay value, although the amateurish art and color scheme leave something to be desired. It’s only available for iOS.

Enlarge / I mean, the title is a bit pretentious, but it is actually clever.

If you’ve played That’s Pretty Clever or the sequel Twice as Clever, this is more of the same and from the same developers—but this app is smoother and more polished than its predecessors. You roll six dice in different colors, then score them in the matching area on your scoresheet (with the white die as a wild). Each die color scores in a different way, and there are bonuses all over the scoresheet for filling in certain spaces, rows, or columns. Scoring 300 is a reasonable challenge, and 400 is doable but hard, while good players have gotten well over 500 (but this player still has not). The original game is probably still the best, but I’d rate this higher than the second one. The board game is multiplayer with a solitaire mode, but the app is solo only. 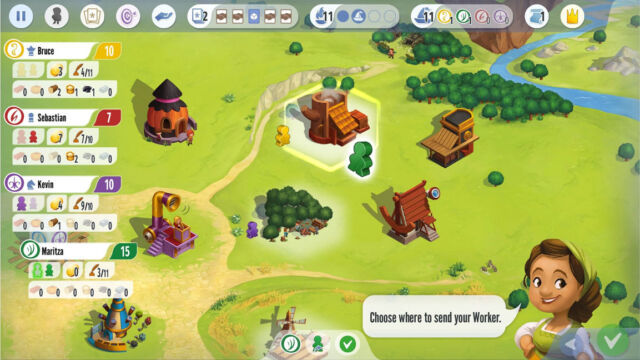 Enlarge / A worker placement legacy game that starts as simple as it looks here but grows more complex.

Charterstone is a legacy game from Jamey Stegmaier, whose Viticulture appeared earlier on this list. This game is a very traditional worker placement sort of game, but one where the rules—and even the workers—change a little bit in each of the 12 games you’ll play in a complete campaign. It’s beautifully rendered, with lots of cute animations for the various buildings you’ll construct, but the physical board is wide and detailed. This app has some trouble translating that to the screen, which is a limitation because you can place a worker on any building, even if it’s not one you placed yourself. The app does still work well with competent AI opponents.

Enlarge / This flip-and-write game translates seamlessly to digital as you fill out your map with polyomino shapes.

The physical game was nominated for the Kennerspiel des Jahres award this past year, losing to The Crew, and it plays an unlimited number of people (like fellow roll-and-write Welcome To…). The app is a straight solo game with several modes, including an unranked one, but it’s the same game. You have a giant sheet with a grid on it, and you try to fill it out in a way to score the four unique scoring cards for that specific game. You do so by coloring in the shapes on the cards that are drawn each round in four different colors, although each card either gives you a choice of two colors or a choice of two shapes. There’s a “cost” associated with each scoring card, so it’s very easy to score in the negatives. I’ve done so many times, in fact.

4. Roll for the Galaxy (Temple Gates) 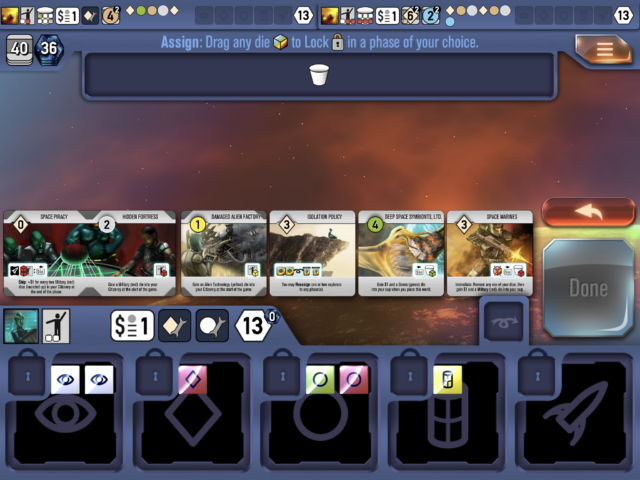 Enlarge / Roll your dice to spend them as workers, building worlds and trading goods for points.

Funny story about this app. I never loved the physical version of Race for the Galaxy, the predecessor to Roll for the Galaxy, but its app is one of the best board game apps ever created. I liked the physical version of Roll for the Galaxy even less… but, once again, the app is spectacular. The general gist is the same in both games–here you’re trying to build a series of tiles, up to 12 total, which you’ll do in part by producing and selling trade goods for money or points. You roll a series of dice that show all the different possible actions and then assign them to their matching actions, picking one of these as your chosen action for the round; other players (or AI players) do the same, and then you take only the chosen actions that each player picked—and only if you have dice assigned to those actions. The AI players seem strong, and games move very quickly. 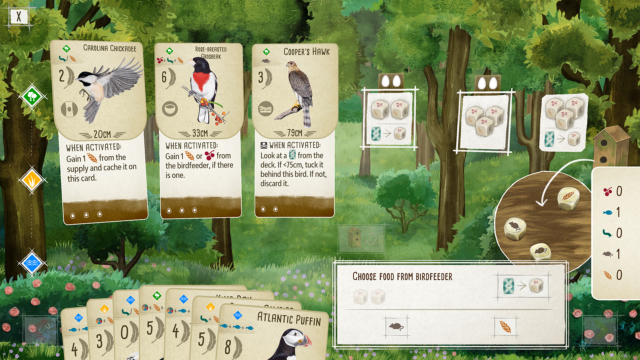 Enlarge / Feed the birds—tuppence a bag.

Wingspan is the best new board game to appear in the last five years, and it’s gotten a digital port worthy of the physical version from developers Monster Couch, who made their first splash in the board game space with this app. Wingspan is a card-drafting and hand-management game, as players try to bring diverse bird species to their three habitats by gathering food, playing cards, and hatching eggs, all of which can also lead to more points. It’s more complex under the hood than it first appears because of the myriad ways to score points and build your ecosystems, but the digital port is tremendous. It takes the physical game’s art and adds animations, and it allows for online play, play against AI opponents, and play with the “automa” solitaire variant from the physical game, which works well since Wingspan doesn’t have that much player interaction. Wingspan appeared for Steam this fall and is coming to Switch at the end of December, so there’s some reason to think iOS and Android versions might be somewhere down the line, which is the only major issue with the app right now. 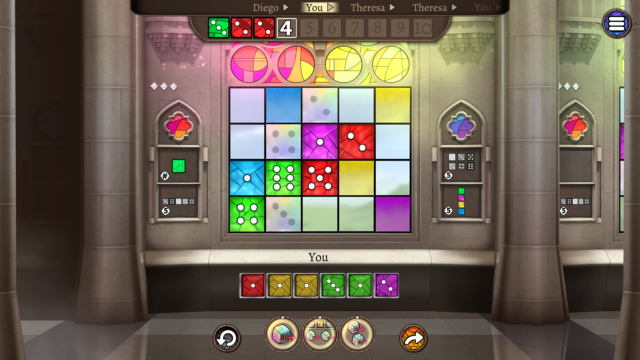 Enlarge / Draft dice to make the most beautiful stained glass window for your cathedral.

Sagrada is an amazing game that also seems to lend itself perfectly to the digital sphere, and Dire Wolf, which developed the top two apps on this list, gave it the adaptation it deserves. It’s a dice-drafting game, so in every round the app rolls a number of dice that players will choose in a snake draft and then place on their boards, which represent stained glass windows. The boards require dice of certain colors for some squares and dice of certain values for other squares, and you score based on objective cards that change in each game (such as having no repeated cards or values in rows or columns, for example). It’s great, it’s replayable, and my only quibble is that I wish the AI players were a bit stronger. Here’s hoping some of the many expansions to the physical game come to the app at some point. 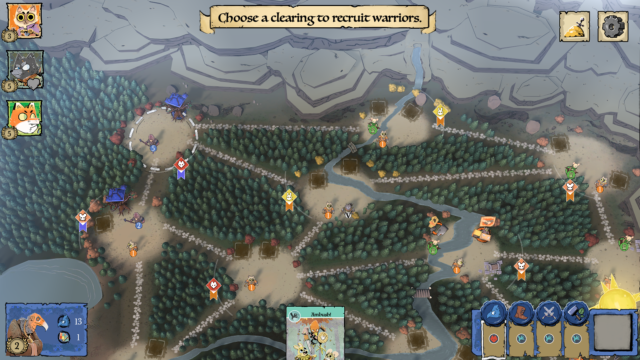 Also from Dire Wolf, Root is a fantastic adaption of a very good but peculiar board game. It’s asymmetrical, meaning that every player has different pieces, powers, goals, and even to some extent different rules. The theme itself is a funny one, as the players represent up to four warring animal factions competing for control of a forest, occasionally getting points by crafting different goods. Each faction requires its own strategy, and you will probably have a favorite or two. The app version does everything right, including the way that it translates the large board to the smaller screens of tablets and phones. The animations enhance the game-play experience, even though they don’t add anything specifically to the game itself, and the tutorial here is among the best ever. It’s a winner even if you haven’t tried the physical game—and a great way to learn it, too.