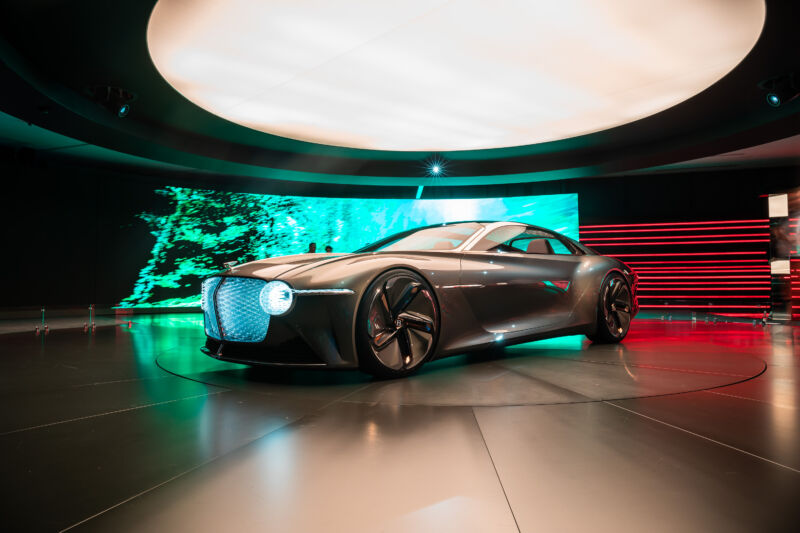 Enlarge / For its centenary in 2019 the company built the EXP 100 GT concept car to think through ideas for an all-electric Bentley.
Bentley

Time is starting to run out for vehicles powered purely by internal combustion engines, and the auto industry knows it. This week Bentley, that bastion of British luxury, became the latest OEM to set a date for that happening—the year 2030. As the company moves into its second century, it has revealed a new plan called “Beyond 100” that it says will “reinvent every aspect of its business to become an end-to-end carbon neutral organization.

Bentley already introduced a plug-in hybrid EV version of the Bentayga SUV and next year it plans to add another pair of PHEVs to its roster—presumably the Continental GT coupe and Flying Spur sedan. In 2025, the company plans to introduce a battery electric vehicle; Bentley CEO Adrian Hallmark told Autoweek that “you’ve got to pick a point in time where battery power density, especially for bigger cars, is the liberator for us. We’ve always said that the mid-2020s is the time when you can expect to see 120-plus kilowatt-hour batteries coming through the supply chain.”

2025 will also be the last year you’ll be able to buy a Bentley that doesn’t plug in, because in 2026 the brand is dropping everything other than PHEVs and BEVs. In 2030, those PHEVs will be gone, too, leaving just BEVs to wear the winged B badge with pride. Along the way, Bentley is also pledging to reduce its factory’s environmental impact and go plastic neutral.

Developing that new BEV shouldn’t be too hard, as Bentley will be able to take advantage of the new PPE electric car platform being developed by Audi and Porsche (which, like Bentley, are both owned by Volkswagen Group). And while I’m prognosticating, I’d say that the announcement of the Beyond 100 plan should put paid to rumors that VW Group is putting Bentley up for sale.

Expensive homes are being snapped up in Hudson Yards

Source: Pa. lawmaker gets a positive test at Trump meeting