Picture the scene. Swimming off Scotland’s west coast during a summer holiday you notice a large dark shark nearly 10 metres long headed towards you. A prominent triangular dorsal fin cuts the surface, the powerful rhythmically beating tail driving it silently through the cloudy green depths. You’re transfixed by a cavernous mouth large enough to swallow a seal.

Musing this may be your last swim, it might be surprising to learn this leviathan of the deep is a harmless yet endangered gentle giant. It has little interest in humans, focusing on some unseen bounty of the warmer summer waters: zooplankton, the tiny creatures found near the surface of the ocean.

This is the basking shark (Cetorhinus maximus), once common off western Europe, feeding on the annual plankton bonanza of the European shelf.

Our recent study suggests holidaymakers and basking sharks have much in common. They make temporary forays into these higher latitudes, travelling familiar routes with extended family, feeding on local fare at well-known places visited on previous trips.

Areas supporting high densities of zooplankton are like tourist traps, drawing basking sharks from across the Atlantic in late spring and summer. Hundreds converge in inshore surface waters on the Scottish west coast, Ireland and Isle of Man.

Once hunted for its oily liver across all oceans, basking sharks in the the north-east Atlantic were primarily targeted, with more than 80,000 slaughtered in the second half of the 20th century. This earned the world’s second biggest fish (after the whale shark) a place on the International Union for Conservation of Nature´s Red List. A critical indicator of biodiversity, this catalogue of species under threat of global extinction makes depressing reading.

Conservation management of the basking shark demands knowledge of its ecology and movement patterns. These slow-swimming coastal predators easily traverse the equator and ocean basins, moving from one legislative domain to another. Identifying important feeding sites and routes popular for annual migrations can therefore help countries enact effective protection.

Difficult to track and observe, satellite tagging has revealed shark movements, showing use of the ocean throughout a year. One study suggests that basking sharks have an attachment to particular areas, returning annually to feeding sites, a behaviour known as seasonal site fidelity.

Our study focused on developing genetic markers to identify individuals and establish their migration routes, population connectivity and size. We also wanted to explore basking sharks’ genetic diversity – an indicator of a species’ ability to future proof against environmental change, and kinship of feeding clusters.

But developing tools removed only one obstacle. Another was lack of routine DNA sampling of basking shark groups. A breakthrough came when, in desperation, we discovered skin mucus from a tail swipe against a boat was a DNA source. Routine swabbing of basking shark groups – quickly and with minimal disturbance – provided genetic profiles of more than 400 individuals and a snapshot of those travelling together.

This register identified individuals arriving at summer feeding sites, revealing that sharks were re-sighted within seasons and again in later years, sometimes around the same date at sampling locations only kilometres apart. This supports findings of basking sharks repeatedly visiting feeding sites in the recently designated Sea of the Hebrides MPA. Ominously, our study also indicates the Irish Sea is an important migration route – an area of increasing human activity. 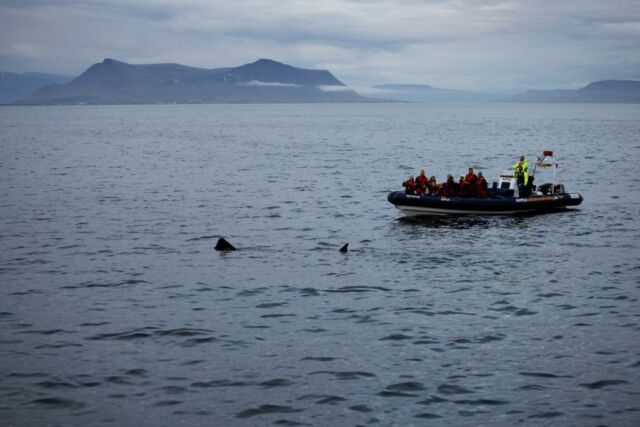 Enlarge / The distinctive dorsal fin of a basking shark off the coast of Denmark.
picture alliance | Getty Images

We expected the roaming and mixing of cosmopolitan, filter-feeders that live long lives to erode genetic differences between populations. But regular sampling of feeding groups revealed basking sharks off the coast of Ireland in spring (perhaps having wintered near the US) were genetically distinct from north-east Atlantic populations. This differentiation was explained when genetic snapshots made up family albums.

We found that basking shark groups consist of related individuals, indicating a tendency to travel prescribed seasonal migration routes as extended family parties. It would seem the family that feeds together, stays together.

Until our study, the perception was that they moved into warmer waters from widespread locations, sniffing out a plankton meal, collecting as groups of unrelated individuals – like gourmands headed into the city, chancing on finding a good restaurant by smell.

Now it looks like basking sharks carry “road maps” of gourmet venues, taking the family along. Perhaps travelling together allows young kin to learn accurate navigation, and maybe many noses are better at sniffing out a meal of densely packed zooplankton.

Worse still, most variation is distributed amongst families, so loss of kin groups erodes genetic variation rapidly – as when basking sharks were hunted, and as occurs now during accidental bycatch, when fishing vessels trap unwanted marine creatures in their nets.

Such population size and structure, coupled with tendencies to frequent inshore feeding areas earmarked for development of marine renewables such as windfarms, may not produce a happy outcome without intelligent management of such environments. When it comes to basking shark conservation we have to remember that in a rapidly changing world, family matters.

This story first appeared on The Conversation.

‘Be More Positive’: Fauci Describes What It Was Like Working