European banks are doing something that got them into trouble years ago: loading up on government debt, a trade investors call the “doom loop.”

Banks in the eurozone, stuffed with excess cash thanks to Covid-19 central bank relief efforts, bought close to €200 billion, the equivalent of $245 billion, in government debt of their home countries in the year to September. That has raised their holdings by 19% to €1.2 trillion, according to the European Central Bank. 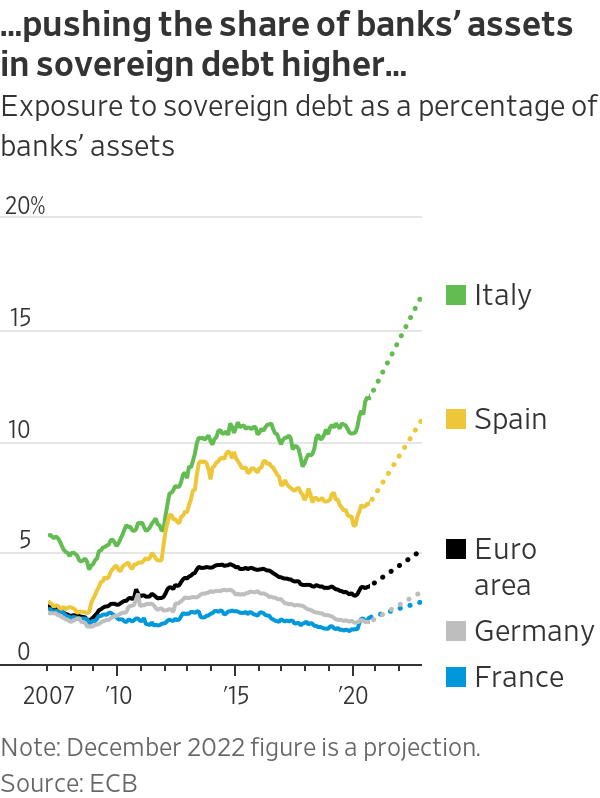 This comes against the backdrop of massive government and central bank support packages that have buoyed assets. The ECB has been buying big quantities of eurozone government bonds, keeping their prices stable and making the investment safe for banks.

The fear is that behind the support lies increasingly fragile government finances, as countries borrow aggressively to counteract the effect of the Covid-19 pandemic.

It rekindles memories of Europe’s last financial crisis early last decade. In 2012, what started as a struggle by weaker eurozone countries to repay debts turned into a financial-sector crisis. Banks held mountains of government bonds that fell in value, triggering a spiral of ratings downgrades that sent bank borrowing costs up, leading to a credit crunch that slowed economic growth. That hit government finances and perpetuated the doom loop between banks and their sovereigns.

“In Europe you can’t take for granted that the ECB will always step in,” said Jérôme Legras, head of research at Axiom Alternative Investments.

Italian and Spanish banks currently hold roughly a fifth of their respective countries’ outstanding debt, according to the ECB.

For now, markets are sanguine to the risks. Borrowing costs for banks and governments are close to or at all-time lows. The additional interest Italy has to pay on its 10-year bonds is at its narrowest compared with similar German debt—around 1.1 percentage point—since 2018. Portuguese 10-year yields recently went negative for the first time.

“The risk is close to nil on a two-to three-year horizon. But after that, the situation will change radically” once investors start evaluating the sustainability of some countries’ debt, said

Lorenzo Codogno,
a former chief economist at the Italian Treasury.

The purchases come as governments are issuing more debt than ever trying to raise funds to fight the coronavirus pandemic. Italy’s public debt is expected to grow close to 160% of gross domestic product this year and stay around that level at least through 2022, according to the European Commission. It was 135% last year. 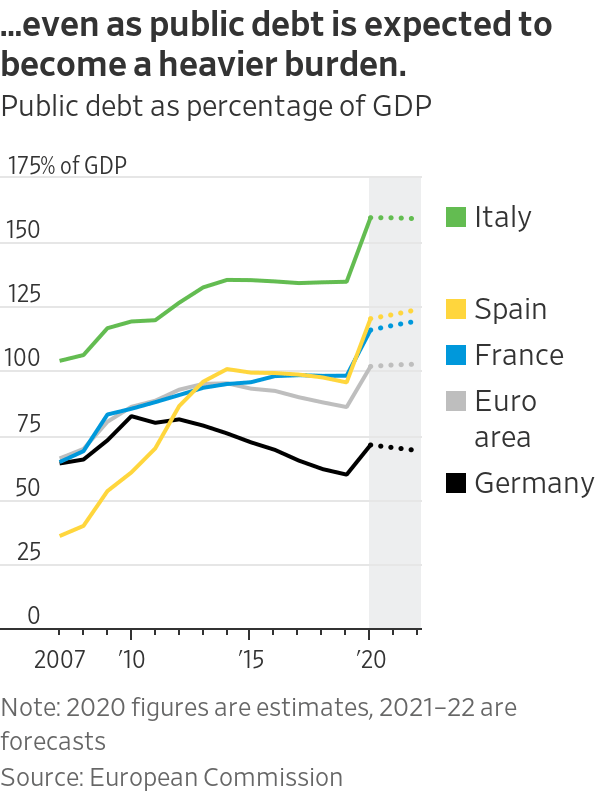 The ECB is also providing cheap credit to banks to incentivize lending. An easy way for banks to make money with the program is to buy government bonds that yield more than the borrowing cost.

Banco Bilbao Vizcaya Argentaria SA,
Spain’s second-largest lender by assets, increased its holdings of Spanish bonds by 35% in the first six months of the year to about €34 billion. “The increase is aimed at improving the cost of excess liquidity after the full take up of the ECB’s loan program,” a spokesman for the bank said.

In Italy,
Intesa Sanpaolo
SpA, Italy’s second largest bank by assets and a big buyer of Italian debt, increased its domestic bondholdings by 18% this year to €40 billion in September.

Marco Troiano, deputy head of the banks team at rating agency Scope Ratings, estimates Intesa and UniCredit SpA, Italy’s largest bank by assets, had exposures to Italian sovereign debt as of June worth more than 80% of their core equity tier 1, a key measure of banks’ ability to withstand losses. At many smaller banks the figure surpassed 200%.

“Intesa Sanpaolo continues to maintain its holding of Italian sovereign bonds below 50% of its total sovereign bondholdings, a level that supervisors and investors consider comfortable,” a spokesman for the bank said.

A UniCredit spokesman said the bank is actually running counter to the trend, cutting its exposure to Italian sovereign debt since 2018. It hasn’t used the ECB loan program to pile into government debt. “We are extremely comfortable with our sovereign holdings,” he added.

Banks set aside little to no capital to account for sovereign risk because regulators consider these assets safe. Last year, Germany’s finance minister floated the idea of putting a limit on how much banks can hold risk-free, as a condition for deepening the euro-area banking union, meant to make banks more stable no matter where they are based.

Mr. Legras isn’t worried in the short term because earlier this month the ECB extended its emergency bond-buying program through March 2022.

How concerned are you about European banks acquiring government debt? Join the conversation below.

Andrew Mulliner,
a bond portfolio manager at Janus Henderson who has invested in Italian, Spanish and Portuguese debt, said given yields are so low, holding the securities has become less attractive for private investors. That means banks will have an increasingly bigger role in the purchases.

“It’s a risk amplifier” for banks, Mr. Mulliner said. “That said, if your sovereign is going bust, chances are your banks are probably going bust as well, whether they hold a lot of government debt or not.”

On Park Avenue, a $1 billion tower is set to