AT&T is killing off the online-video service formerly known as DirecTV Now and introducing a no-contract option for the newer online service that replaced it.

AT&T unveiled DirecTV Now late in 2016, the year after AT&T bought the DirecTV satellite company. Prices originally started at $35 a month for the live-TV online service, and it had signed up 1.86 million subscribers by Q3 2018. But customers quickly fled as AT&T repeatedly raised prices and cut down on the use of promotional deals, leaving the service with just 683,000 subscribers at the end of Q3 2020.

In 2019, AT&T changed the name from DirecTV Now to AT&T TV Now, creating confusion among customers and its own employees because the company simultaneously unveiled another online streaming service called AT&T TV.

AT&T TV was pitched as a more robust replacement for satellite TV, and it even mimicked cable and satellite by imposing contracts, hidden fees, and a big second-year price hike. Going forward, AT&T TV Now will no longer be offered to new customers, and AT&T TV will be the flagship for AT&T’s live-TV streaming business. “AT&T TV Now has merged with AT&T TV,” the service’s website says in an update flagged in a news article by TV Answer Man yesterday.

For existing users, “AT&T TV Now customers’ service and plans remain in effect” without any changes, an AT&T spokesperson told Ars. “We have no other price changes to announce at this time.”

Previously, AT&T TV was only available with a contract. There is now a no-contract option that costs more in the first year but could be cheaper in the long run if customers use it for multiple years.

The first-year prices for contract plans range from $59.99 to $129.99, plus a regional sports network fee of up to $8.49 for all packages except the cheapest one. Including the sports fee, the first-year prices on most of the contract plans are $10 or so cheaper than the equivalent no-contract options. An exception is the “premier” package with 140 channels and HBO Max, which costs about $140 the first year regardless of whether you have a contract or not.

Customers who select the two-year contract will get a big price hike the second year, with base prices ranging from $93 to $183 per month plus the sports fee. The second-year prices could actually be more than that since it’s based on the “then-prevailing rate,” which AT&T could change. The contract option also requires a $19.95 activation fee and an early termination fee of $15 for each month remaining on the contract.

There is no automatic price increase after 12 months for the no-contract option, but that is not a guarantee that prices won’t rise. AT&T’s fine print says that “pricing, channels, features, and terms are subject to change and may be modified or discontinued at any time without notice.”

There’s no price change right now for existing AT&T TV customers. Despite the new no-contract option, the contracts for existing AT&T TV customers “remain in effect,” AT&T told Ars. As is always the case with AT&T TV services, the pricing tiers are convoluted, so new customers should examine them carefully before signing up. This table provides a breakdown of key differences between contract and no-contract options: 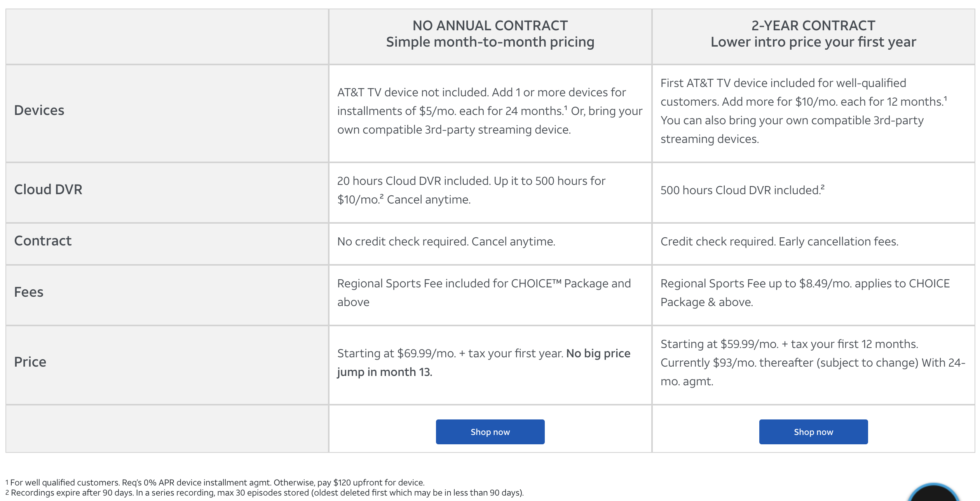 For financial reporting purposes, AT&T TV is part of a category AT&T calls “Premium TV” services, which also includes DirecTV satellite and U-verse wireline TV. AT&T has lost nearly 8 million customers from the category in the past few years, dropping from over 25 million in early 2017 to 17.1 million at the end of September 2020.

More customer losses could be on the way, as AT&T is raising prices on both DirecTV and U-verse effective January 17. AT&T is trying to sell DirecTV, but offers so far have reportedly valued the satellite provider at about a third of the $49 billion AT&T paid in 2015.