Saudi Aramco raised $8 billion from the sale of U.S. dollar-denominated bonds Tuesday as the cash-strapped oil giant seeks funds to meet a dividend pledge to shareholders.

Saudi Arabian Oil Co.
, as the company is officially called, sold the debt at yields higher than those on Saudi government debt of similar maturities, according to a document from one of the lead manager banks of the issue and data from FactSet. That indicates investors see Aramco as riskier than the Saudi government and contrasts with last year when the oil firm raised $12 billion in a debut bond that sported lower borrowing costs than the sovereign.

The financial position of the world’s largest oil producer has darkened as it contends with a fall in crude prices caused by the coronavirus pandemic. Aramco pledged last year to pay an annual $75 billion dividend to shareholders to lure them to an initial public offering. It also paid $69 billion for a majority stake in Saudi Arabia’s national petrochemicals firm in a deal encouraged by the Saudi government.

Earlier this month, the company posted a 45% fall in net income for the third quarter, generating free cash flow of only $12.4 billion, compared with the roughly $18.75 billion it requires each three months to meet its dividend pledge. The Saudi government owns roughly 98% of the company.

An Aramco spokesperson didn’t immediately respond to requests for comment.

Investors would normally be concerned about a company raising debt to help fund dividends, said Zeina Rizk, executive director at Arqaam Capital in Dubai. But Aramco remains the world’s largest oil producer with one of the lowest costs of extracting oil among its peers. So, “investors would accept that,” she said. 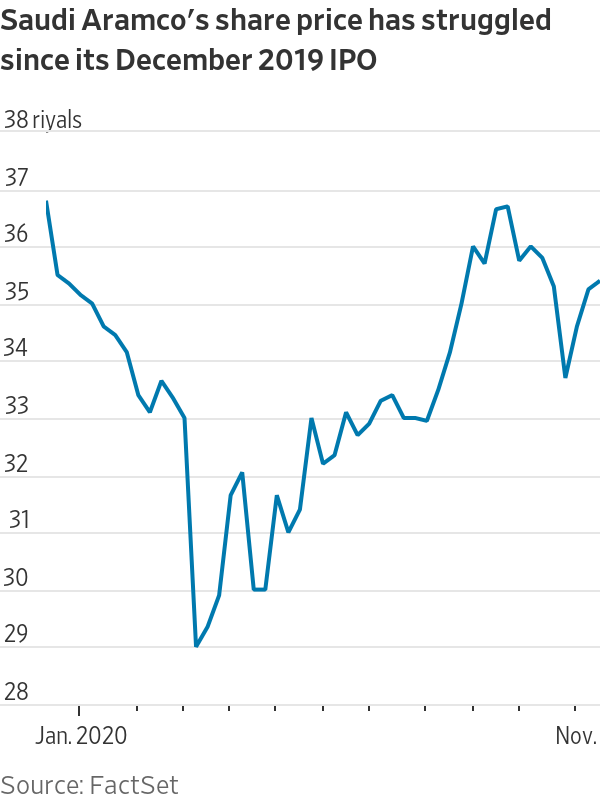 On top of raising debt, Aramco is now cutting jobs, weighing the sale of assets and reviewing plans to expand at home and abroad, The Wall Street Journal has reported.

The company sold five bond tranches with maturities ranging from three years to 50 years, according to the document from one of the lead banks. Aramco’s 30-year bonds sold at a yield of 3.30%, compared with Saudi government bonds maturing in 2050 that yield currently 3.23% on the secondary market, according to data from FactSet.

Corporate bonds usually aren’t rated stronger by credit-rating firms than the sovereign debt of the country where they are based. But ratings companies last year said debt from Aramco, then the world’s most profitable company, would be rated higher on a stand-alone basis than the Saudi government.

The ratings endorsement helped Aramco sell its debt for a lower borrowing cost than Saudi government debt at the time. But since then, the yield on Aramco bonds traded in the secondary market has tightened to the yield offered on similar bonds by the Saudi government.

Aramco’s sale Tuesday came at an opportune time. Investors are hopeful for a global economic recovery after two sets of upbeat results in a week on a potential Covid-19 vaccine. Oil prices have rallied since then.

Write to Rory Jones at rory.jones@wsj.com and Emese Bartha at emese.bartha@wsj.com