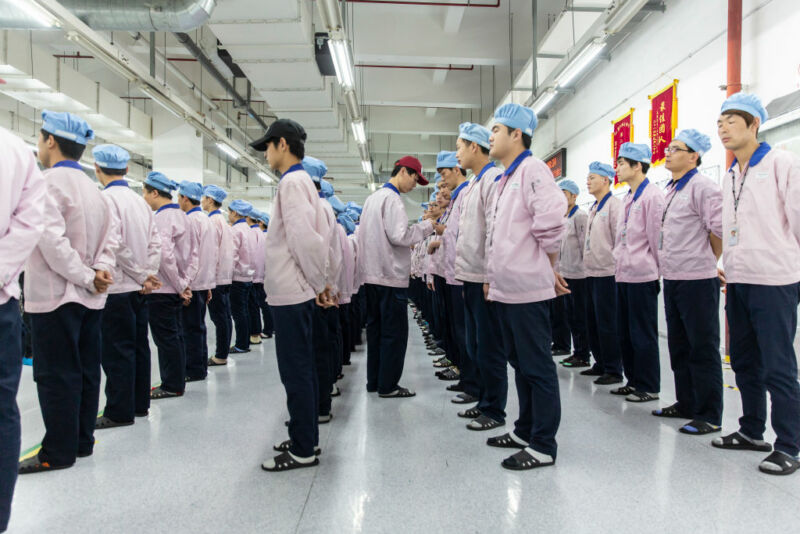 Enlarge / Employees line up for row call before their shift starts at a Pegatron Corp. factory in Shanghai, China, on Friday, April 15, 2016.

Apple has reprimanded one of its largest manufacturers after a Financial Times investigation found that thousands of student interns had worked overtime to assemble iPhones, in breach of Chinese law.

After being contacted by the FT, Apple said it had stopped giving “new business” to Pegatron, its second-largest iPhone assembler after Foxconn. However, workers there said the factory was still manufacturing new products ahead of the holidays.

Apple is racing to make up for production delays earlier in the year caused by the pandemic. The latest revelations of supply chain abuses will come as an embarrassment to the company during its busiest season for new product launches in years. The latest iPhone 12 models are set to go on sale on Friday, two months later than normal. At an event on Tuesday, Apple is also expected to reveal new Mac computers.

Pegatron, which has headquarters in Taiwan but has operations in China, is one of Apple’s largest manufacturers, producing iPhones, Macs, iPads and other components for several years. It has also faced recurring allegations about working conditions from campaign groups such as China Labor Watch.

“Pegatron isn’t like other factories. They will force you to work overtime: 12 hours per day,” said one former worker, adding that this was to make up for rush orders or staff quitting.

Until last month, thousands of student interns had assembled iPhones at Pegatron’s Kunshan plant and illegally worked overtime and night shifts, according to former interns and workers at the plant. Chinese government regulations prevent students from interning in factories if the work is unrelated to their studies.

The alleged coercive use of students during the factory’s peak production periods mirrors the abuses previously found by the FT at Foxconn. Schools and local governments often collaborate to ensure labor supply for big companies in China.

The latest disclosures follow the death last month of a worker in his mid-thirties after falling unconscious in a Pegatron dormitory.

“Apple has placed Pegatron on probation and Pegatron will not receive any new business from Apple until they complete all of the corrective actions required,” Apple said.

Apple did not explain how it defined “new business,” nor what the material impact of the “probation,” if any, would be on Pegatron. The iPhone maker sought to place blame for the abuses squarely on its manufacturing partner, saying: “The individuals at Pegatron responsible for the violations went to extraordinary lengths to evade our oversight mechanisms. Pegatron has now fired the executive with direct oversight of the program.”

However, despite saying it discovered the violations to its supplier guidelines “several weeks ago,” it only issued a statement on the matter after being presented with new evidence by the FT.

Students told the FT they had been forced by their schools to intern at the Pegatron plant in order to graduate with degrees with little relevance to factory work, such as graphic design and computer science.

“We have a rigorous review and approval process for any student worker program, which ensures the intern’s work is related to their major and prohibits overtime or night shifts. Pegatron misclassified the student workers in their program and falsified paperwork to disguise violations,” said Apple.

Pegatron said: “During [a] recent monitoring program conducted by our customer, some student workers at Pegatron Shanghai and Kunshan campus were identified working night shifts, overtime and in positions unrelated to their majors, which were not in compliance with local rules and regulations.”

Apple’s main iPhone supplier Foxconn has historically been linked to labor abuses, following a series of suicides of factory workers in 2010. But in recent months, alleged abuses at Pegatron have also appeared on the Chinese internet.

In September, the company apologised after a video went viral on social media of managers at the Kunshan plant throwing workers’ identity cards on the floor during a routine roll call, forcing workers to stoop to pick them up. Chinese state media also covered the incident.

The following month, the relatives of Fu Jie, an army veteran in his thirties working at the Kunshan plant, protested at the factory gate after he died suddenly. In the absence of a public statement from the factory, news of the death spread by word of mouth and social media. Some workers formed a mutual support group on WeChat, the Chinese social media app, for those at “the internet-infamous black factory, Pegatron.”

“Once you step on to the factory floor, you can’t stop working until lunchtime. Sometimes you get orders you can’t complete — 600 to 1,000 [iPhones] per hour — and then they don’t let you eat lunch,” said the former worker. Pegatron did not immediately respond to the FT regarding the worker’s claims.

Apple’s annual new product launches are the busiest period for its suppliers in China, which have to rush to boost staff and working hours to meet a sudden increase in orders.

Pegatron’s Kunshan plant ordered students to stop working on October 23, according to a notice sent to one of the students. He said that his class of roughly 1,000 students had been transferred by their teachers to another electronics factory in the city of Chuzhou.

After being interviewed by the FT over WeChat, one factory employee was warned by his manager. The incident suggested collaboration between Pegatron and local government bureaus with powers to surveil citizens’ communications. Pegatron declined to comment on the issue of surveillance.