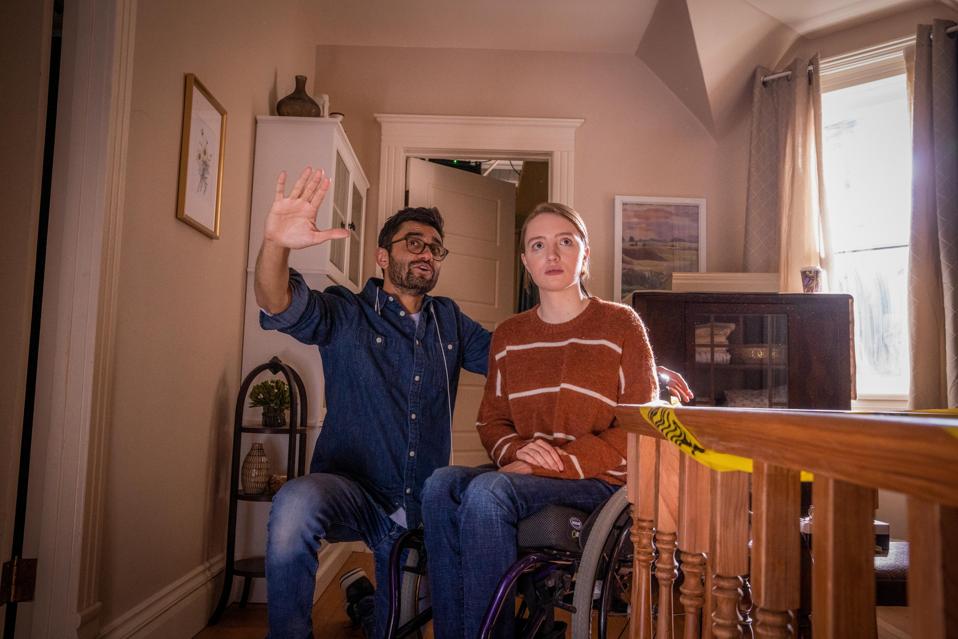 Writer-director Aneesh Chaganty with actress Kiera Allen on the set of ‘Run.’

Two years after the acclaimed thriller Searching put him on the map, fiercely talented writer-director Aneesh Chaganty is back with Run.

Another victim of the 2020 theatrical exodus due to the coronavirus pandemic, the taut thriller, about a homeschooled teenager who suspects her mother is keeping a dark secret, debuts on Hulu.

Although it missed out on a big-screen release, Chaganty did get to test it in that space. Did it get the reactions he expected?

“Yes and no,” he explained. “Run was always planned to get a theatrical release, so we got to test the movie out and show it to a bunch of full audiences in theaters and to hear the gasps and whispers, you make a movie for that. Run isn’t like a standard horror movie with sudden jumps and stuff like that. It’s like holding your breath and experiencing people doing that and then letting it out was fun to hear and watch. That was the sort of reaction that we were hoping for.”

“However, when we originally wrote this film, it was much more of a family drama that becomes a thriller. This movie is a bare-bones thriller that starts and doesn’t stop. The slow build of that relationship between the mother and the daughter before the turn happens was something that people weren’t into as much as I wanted them to be. That surprised me a bit. That’s basically how Run became this much more just streamlined movie. I think works on its merit, but that was one of the more unexpected things about the process.”

While the film’s razor-sharp tension excites, anyone watching Run likely won’t be able to help but notice that it uses genre tropes, albeit it deftly.

“Misery, Rear Window, Psycho, Whatever Happened to Baby Jane, the visuals of Unbreakable and Signs, those are all hardcore references that Run wears on its sleeve, for better or for worse,” the filmmaker confirmed. “For me, this whole movie was this exercise in emulation of the films of Hitchcock and Shyamalan.”

“When I finished Searching, all I wanted to do was make a movie where I could prove to myself that I knew how to make movies, that I could do the opposite of Searching, a movie that didn’t need to wear a lot on its sleeve to get people excited. Run could just be one or two characters, one building, one small town, one camera, and still get people going. I wanted to show myself that I could do that with those constraints, but without like being a tech filmmaker.”

He added, “The films that I love most that often work with those constraints were those old school, classic movies that didn’t rely on blood but long shots and holding tension. If you were to look at my career like the largest standpoint ever, I think like there’s more emulation here than there is personal expression, and I think that’s something that I want to recalibrate for a third movie. For Run, though, it was perfect.”

Run’s gasp-inducing ending rounds off the relentless thriller perfectly, but was it the only one that was considered, or are there alternative conclusions lurking somewhere?

“There was one possible ending. We shot just the one,” Chaganty revealed. “There was a version of events where we wondered if, without giving too much away, we might have to cut out earlier than the last three seconds of this movie where something happens. It’s sort of like a final rug pull, but if it didn’t work, we could chop it off. I think the thing that I’m surprised about is that it stayed as strongly as it did because, in early cuts of the film, we talked about the mom’s mom and everyone’s family lineage. The whole story was about a child becoming her parent without her even trying to. It’s like how we all move away from our parents only to turn into them.”

“I’m glad that the final moment still resonated to an extent. I love thrillers that end and remind you of the movie you just watched. Misery does it well where Paul Sheldon, the writer, is at a restaurant, and the voiceover says he sometimes still thinks of Annie Wilkes and sees her just random places, then he looks up, and she’s the waitress. I love that, and I wanted the end of Run to do that and remind you of what you just saw.” 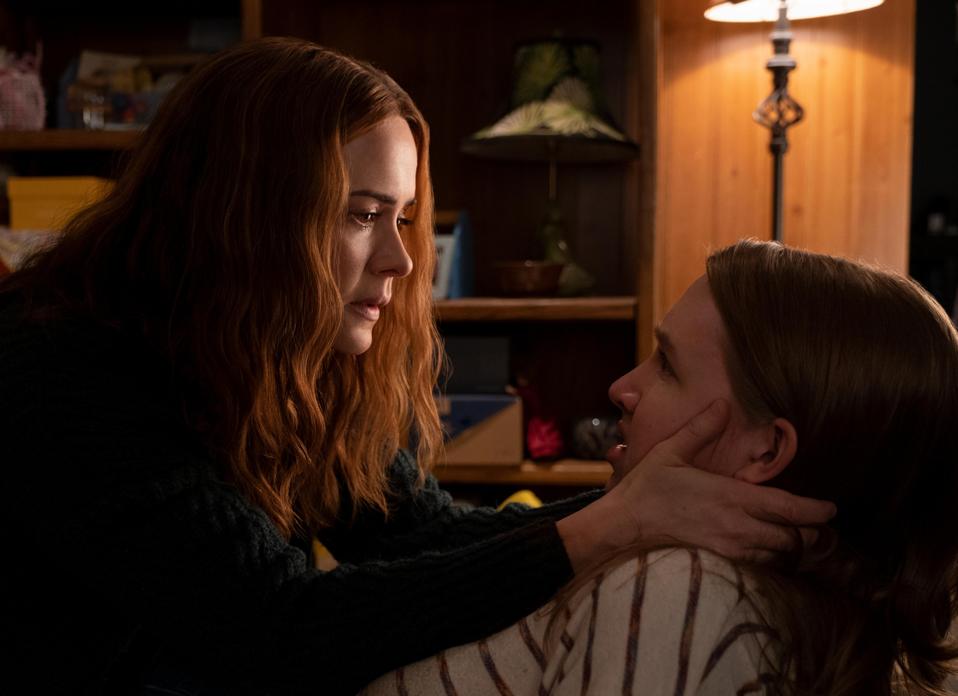 Sarah Paulson plays the mother with a secret in writer-director Aneesh Chaganty’s ‘Run.’

In Run, Sarah Paulson plays the mother with a secret, and newcomer Kiera Allen plays her daughter, who is in a wheelchair – something the actress uses in real life.

“In a lot of ways, there is no better acting school than just getting thrust into it with someone who is as high caliber and quality as Sarah Paulson. To watch Kiera, a total newbie to the world of film acting, go head to head within two months of us finding her out of nowhere to being yelled at by Sarah and running for her life and stuff was a really, really cool thing,” Chaganty enthused. “Two non-disabled men wrote this script, and it’s about a woman in a wheelchair. I think the thing that helped us the most is that we were just very conscious of that fact, so we opened up the process as much as we could to Kiera every single day, and I would ask questions. She had a hand in shaping how her room looked, how she moved, we changed blocking, but it’s not like she changed the plot. She changed these small things that made big differences in the film’s authenticity.”

He added, “One of the coolest things about the reception of that this film has been getting it that we’ve been talking to critics and writers who have disabilities and use wheelchairs and hearing that we got that right is invaluable.”

The opportunity offered by the titular sequence of Chaganty’s feature work to date is not lost on him.

“I think there will eventually be some sort of completion of a trilogy. I love this verb trilogy that we’ve got going on, where we have done ‘search,’ now ‘run’ and then maybe we could do ‘hide’ or something,” the director mused. “In a lot of ways, I think with search and run because Run was so intentionally the opposite of Searching on purpose, I think they are complementary pieces. I think our next film is a kind of heist movie. There are very thrilling elements in it, but it is set against the backdrop of the immigration industry. It’s very different in tone. Run was my experiment.”

“If it fails, maybe I’ll come back to the small-scale thriller filmmaking, but I had to show myself that I knew how to do this. For the most part, I think I got a lot of the elements of the experiment correct. Whatever you think about the movie, I think there are a lot of effective parts to it. I think I’m ready to kind of jump off into a slightly bigger landscape now.”

Chaganty’s feature debut, Searching, was made for $880,000 and grossed $75.5 million at the worldwide box office.

“The Searching sequel is happening right now,” he confirmed. “I’m not directing it or writing it, but it is being made right now. It’s almost five years if you talk about when we made the movie. It is weird. The best stuff always feels relevant to the time it comes out, but Searching was made long before it came out. That was a total coincidence.”

“It just felt at the time that we were starting to move towards a place where we were living our lives on screens, but now it feels even more relevant than ever. It just feels so possible now. We all live our lives, even more than we did two years ago, on these screens because of the pandemic.”

Run had a significantly larger budget than Searching and Chaganty’s already making his next move up the Hollywood ladder.

“I’ve always wanted to be that director that did the step by step thing and not go from making a movie for less than $1 million to a $50 million movie,” he concluded. “I think the next film is going to be a slightly bigger jump, we’re thinking potentially in the $30 million region or something like that, but who knows if Hollywood will be making those movies or what the situation will be with theaters in a few years. We’re writing it right now and hoping that somewhere down the line someone’s going to see Run, which I co-wrote and was produced with the same people as Searching, and go, ‘Hey, maybe we can trust these guys and this kid with another shot?’”