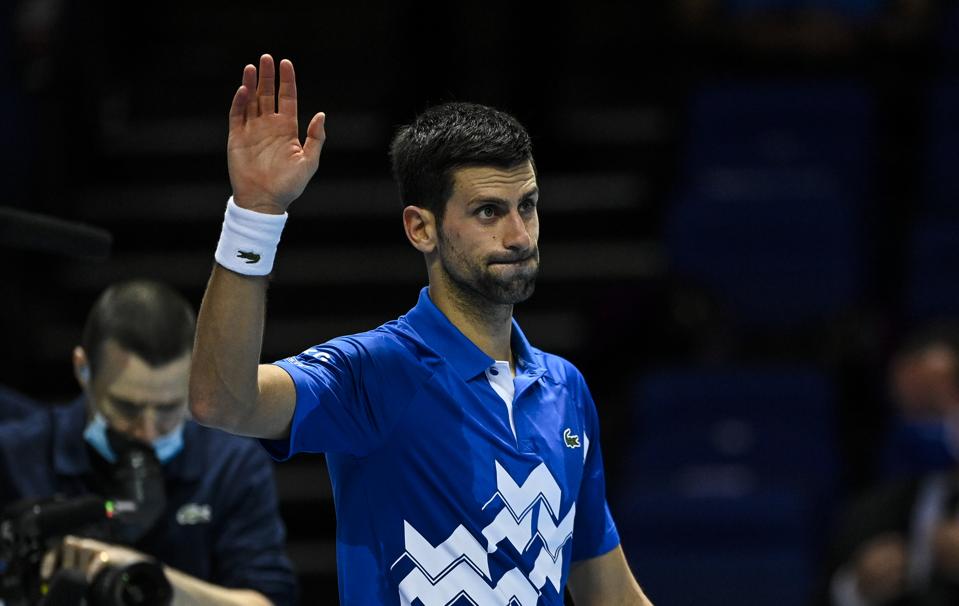 LONDON, ENGLAND – NOVEMBER 16: Novak Djokovic of Serbia celebrates his victory over Diego … [+] Schwartzman of Argentina during Day 2 of the Nitto ATP World Tour Finals at The O2 Arena on November 16, 2020 in London, England. (Photo by TPN/Getty Images)

Novak Djokovic currently owns 17 Grand Slam singles titles, three fewer than his chief rivals Roger Federer and Rafael Nadal, but because Djokovic is younger and still in his prime he is the favorite to finish as the Greatest of All Time in men’s tennis.

That’s the word according to two former American world No. 1s: Jim Courier and Andy Roddick.

“The way I see it….Novak will win more majors from today than the other two players, I believe,” Courier said Tuesday on Tennis Channel. “Nadal I think will be second in that competition. Federer, maybe he has another one in him. He was oh so close at Wimbledon last year. Let’s not forget that Novak stole one there. It could easily be Federer 21 and Djokovic 16.

“But I think Nadal has probably got 2-3 more in him, I think that Djokovic is somewhere in that 5-6 range, all assuming health.”

Courier was referring to the 2019 Wimbledon final, Federer’s last appearance in a Grand Slam final, where he held two match points on Djokovic at 8-7, 40-15 in the fifth set but couldn’t close it out. 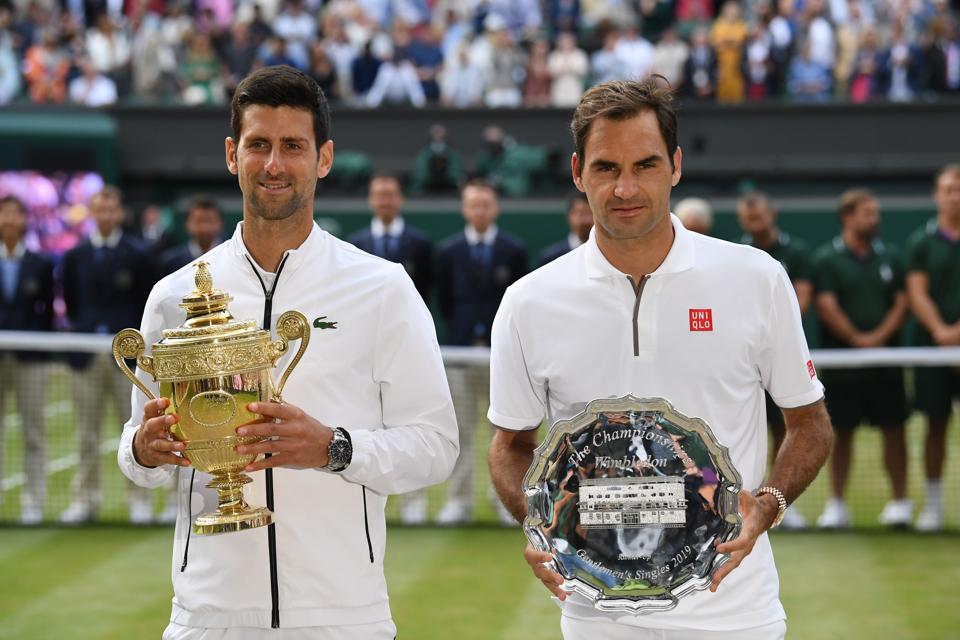 Serbia’s Novak Djokovic (L) poses with the winner’s trophy and Switzerland’s Roger Federer (R) holds … [+] the runners up plate during the presentation after the men’s singles final on day thirteen of the 2019 Wimbledon Championships at The All England Lawn Tennis Club in Wimbledon, southwest London, on July 14, 2019. (Photo by Ben STANSALL / AFP) / RESTRICTED TO EDITORIAL USE (Photo credit should read BEN STANSALL/AFP via Getty Images)

Had Federer won that match, he would have had 21 career majors to Djokovic’s 16. Nadal had 18 at the time.

“At the end of the day, this guy [Djokovic] may have more than all of them,” John McEnroe said on air at the time. “In a couple years, two, three years.”

Djokovic won his 17th major in February at the Australian Open, where he handled Federer in straight sets in the semifinals before prevailing over Dominic Thiem in an epic five-set final.

He wasn’t able to get his 18th after that because he was disqualified in the fourth round of the U.S. Open when he unintentionally hit a ball into the throat of a linesman, and was then crushed last month in straight sets by Nadal in the Roland Garros final. Nadal’s incredible 13th French Open crown tied him with Federer atop the men’s list with 20 Slams.

“In my mind, it’s pretty straightforward,” Roddick said on Tennis Channel. “I think Novak Djokovic is the favorite in three out of the four Slams for the next year or two. If you think back in 2020, he misses Wimbledon where he’s been the best player for a long time [because it was canceled due to the pandemic]. The U.S. Open happens and he hits the lines lady. Now it looks like Australia’s in a bit of flux. Novak’s going, ‘Come on, we gotta get on the court, we gotta play these matches while I’m in the prime of my career.’”

Roddick was referring to the news that the Victorian State government is not letting players quarantine in Australia in December. The Australian Open is set to begin in January, with Federer expected to return after missing most of 2020 due to multiple knee surgeries.

Roddick also maintains that if Djokovic ends up tied with one or both of the other members of the “Big Three,” he deserves the nod as the GOAT.

“Let’s say two of them end up even as far as Grand Slams, it’s a really hard statistical case to make against Novak Djokovic if he ends up tied with the other two guys based on head-to-head, based on year-end No. 1, based on Masters Series 1000 titles,” Roddick said. “It’s a really hard argument to make to say that Novak is not the best of all time if he ends up at least tied with the other two.”

In terms of Masters 1000 titles, Djokovic is the only man to win all nine titles at least twice and currently leads Nadal 36-35 in that category after winning Rome in September.

Both players are now competing in London, where Djokovic is looking to tie Federer’s mark of six Nitto ATP Finals titles.

“Pete was somebody I looked up to when I was growing up, so to match his record is a dream come true” said Djokovic of finishing the year at No. 1. “I will also keep striving to be a better player, hopefully have more success and break more records in a sport I love with all my heart.”