Andrés Cantor and Joe Schramm approach soccer from distinct viewpoints: Cantor as a sports announcer … [+] and Schramm as a marketer.

The coronavirus pandemic has turned the soccer world upside down. Andrés Cantor and Joe Schramm can help put things into perspective.

Andrés Cantor is one of the country’s most popular sportscasters – in English or Spanish. For three decades, the five-time Emmy Award winner has called thousands of matches. FIFA named him among the top ten broadcasters in the world and the number one in North America, regardless of language. He currently serves as lead anchor for Telemundo’s coverage of the upcoming Tokyo Olympics and the Qatar FIFA World Cup. He is also co-chair and owner of radio network Fútbol de Primera, which transmits Spanish-language commentary for top events like the World Cup tournament and Mexican National Team games.

Joe Schramm is president of Schramm Marketing Group, a company which promotes live and televised sports events. The firm also negotiates multimillion dollar sponsorships on behalf of top advertisers. Schramm has been honored as a Cable TV Pioneer. A 30-year veteran of the TV and video industry, Joe has worked on the launch of brand extension services for ESPN, FOX FOXA and MTV. He is well-known in the media industry for his extensive experience in the promotion of soccer.

In this Q&A, the two men share thoughts about Covid-19’s impact on the world of soccer, how Lionel Messi’s departure might have affected Spain’s La Liga, what the German soccer league must do to gain traction in the United States and their thoughts on the upcoming Qatar World Cup.

The coronavirus has had an enormous impact on sports around the world. What are the most important ways the pandemic has impacted football soccer?

Andrés Cantor: The biggest impact has been that football lives off the passion of the fans. I don’t think we’re going to see too many fans in the stadiums around the world until probably early part of next year. Seeing major sporting events, not only football, without fans, is the biggest impact — beyond obviously the impact of the players that test positive.

Joe Schramm: I’d like to add another perspective from the side of those who generate revenue from promoting soccer and helping to sell sponsorships. What I see, across the board, are all these folks who are employed by promoters, by Major League Soccer, by relevant sports confederations. There are a lot of people who are suffering, especially those who have been laid off from venues. One of the biggest effects is not only on ticket sales and on fans, but also the employees. It’s going to take some time to bring them back or hire and train new people. There may be some hiccups in the organizations when soccer comes back.

Broadcast Networks All Cut Away From President Trump’s Election Remarks

With the Tokyo Olympics moving to the summer of 2021, do you think there’s going to be a jam with all of these other tournaments?

Andrés Cantor: Not only did the Olympics move, Copa America moved, the European Cup moved — it’s going to be a very exciting summer of football next year with the Olympics, Copa America, Gold Cup and the Euro. Luckily, the Olympics will be towards the end of the summer. In terms of soccer, the Olympics are always the under-23s plus three overaged players. That should have a big impact on how coaches make their selections because the teams that will compete in Tokyo will be the younger players. Definitely, there will be a lot of football next summer.

Joe Schramm: If you go to prep school in England before you go to college, you take a gap year. 2020 is like the gap year. Next year will be like your freshman year in college — and it’s going to be party all the time. The people I just referred to who are unemployed, they’ll be very happy to come back. Fans will be very happy to come back together. 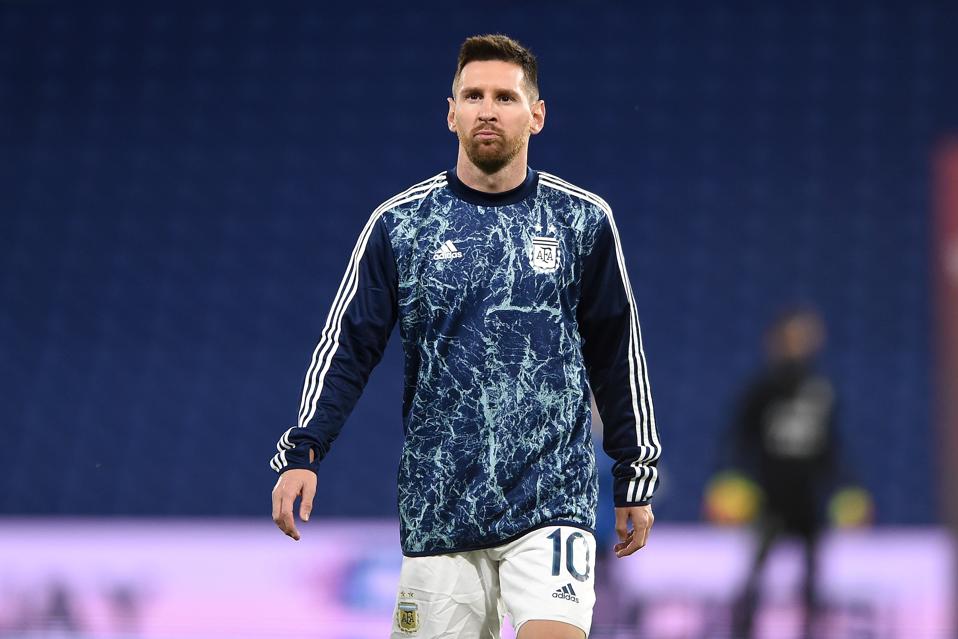 BUENOS AIRES, ARGENTINA – NOVEMBER 12: Lionel Messi of Argentina looks on before a match between … [+] Argentina and Paraguay as part of South American Qualifiers for Qatar 2022 at Estadio Alberto J. Armando on November 12, 2020 in Buenos Aires, Argentina. (Photo by Marcelo Endelli/Getty Images)

A topic that dominated soccer news for months: Lionel Messi. What did his threat to leave mean for Spain’s La Liga?

Andrés Cantor: I will give you my honest opinion. I think La Liga will lose tremendous global impact without Messi. Without him and Cristiano, I don’t think they have any big stars. Teams usually survive the big names, but we have had the privilege of living in the era of the two best football players of at least the last generation with Messi and Cristiano.

I had abandoned the Italian league for a while and returned to it because Cristiano was there. I wanted to see him play at Juventus. The fans that love soccer and that love watching Messi are going to follow him wherever he ends up.

Out of all the Barcelona games, I watched 70% of their matches because of Messi. The other 30% I couldn’t watch because they were playing at the same time that I was on air. But I’m not sure I would watch that many Barcelona games. I think that is the feeling of the average fan now. If you’re a Barca fan, of course you’re going to still watch. But by Messi leaving Spain, I think La Liga would have a great loss.

Joe Schramm: My perspective is one from marketing. Having been marketing to soccer fans for a long time, I know, first and foremost, a soccer fan is a fan of a particular player. Fans will follow players wherever they go. That’s number one.

Number two, fans follow their local or favorite team. It doesn’t matter how good or bad [Argentine team] Boca Juniors is, I know Andrés [a native of Buenos Aires] is going to follow them. Then, the next thing is people follow their national team.

There’s research regarding the fans who follow different players. The ultimate answer is that everyone loses when a superstar leaves. The air is sucked out of the room. There is a loss in revenue and a loss in interest. People go elsewhere until a new superstar comes up to replace them.

Bundesliga, the German soccer league, was one of the first to open up after the COVID lockdown. Does it have a chance to become the next big European league in America?

Andrés Cantor: It’s a very good league. The games are very attractive, but it takes a good marketing campaign to make it big. The games are very fast paced, I think they have nothing to envy the Premier League PINC . It’s just that the Premier League has a marketing campaign behind them second to none. But I’ll watch a good Bayern Munich game against anybody because they play so well.

Joe Schramm: It really depends on a number of factors. I’ve been marketing international soccer in the United States for over 25 years. One of the things that’s very Important is access to watching the matches on TV. The games need to be on at a time that people are going to watch it.

Number two, the team needs to have players that appeal to international soccer fans. In order for Bayern to make it in the United States, there needs to be a lot of marketing effort made and they need to prove themselves. While they could be a superstar team, they need to come to the United States and play exhibition games and sell out stadium. The telecast partner needs to feel as though they’re getting the viewership that they want. The promoters need to be able to demonstrate that the team can bring in a crowd that exceeds 35,000.

That’s the only thing it’s comes down to — numbers, relationships and money. You could have the best team in the world but if you’re not putting effort behind it to promote it, it’s not going to go anywhere. You just have a great team. 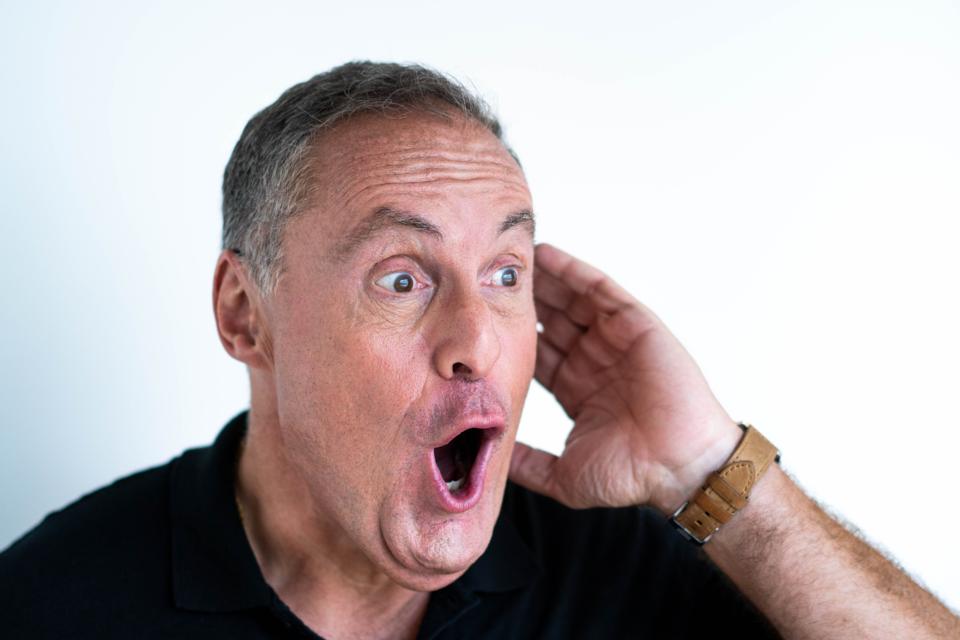 MIAMI, FL MARCH 20, 2018: Telemundo Network soccer commentator Andres Cantor, famous for his goal … [+] call, takes a break from preparing for the world cup in Russia which takes place in the summer of 2018. (Photo by Angel Valentin-For The Washington Post via Getty Images )

What are your thoughts about the Qatar World Cup in 2022?

Andrés Cantor: I have no idea who will win, let alone who will qualify. Everything is so even nowadays. I really hope Argentina qualifies and I hope Messi plays in his last World Cup. I hope Argentina will finally allow me on television and radio to yell out “Argentina, campeon del mundo [Argentina, champion of the world]” which I’ve been waiting to say forever.

Having been in Qatar already last February, I can tell you that this will be the best World Cup ever. First of all, there will be no travel involved. It will be like having the World Cup in New York City or in Miami. Everything is in Qatar but the driving distance from the farthest stadium to the other is one hour by car. All the other stadiums are within 20 or 30 minutes of each other. For the teams, it is going to be incredible to just be in the same hotel, sleep the same bed and not have to travel.

Furthermore, the fact that the games will be played in November and December will be great. Usually, elite players get to the World Cups in the summer when they usually have 60 to 70 very intense games under their belt. Having the event in November means that they will have played no more than 25 competitive games before getting to the World Cup. That is going to have a major impact in the quality of play. November and December should be cool enough. I was there in February and I had to wear a jacket. The stadiums are marvelous. The whole logistics and sporting impact are going to make it the greatest World Cup ever.

Joe Schramm: I agree with Andrés. My experience with the Qatar organizing committee and the people behind the World Cup is that they are very eager to show off their country and demonstrate their hospitality. Fans who travel there will have an extraordinary experience. Sponsors will have an extraordinary experience, feeling like every penny they spent was worth it. And the world will be ready for a party by 2022. The Qatar World Cup is going be the best.

This interview has been edited for brevity and clarity. Listen to the full episodes (Parts 1 and 2) of The Revolución Podcast featuring Andrés Cantor and Schramm on Apple Podcasts, Google Podcasts, Amazon Podcasts, iHeartMedia, Spotify or by clicking here.