The stock market isn’t a bubble, but parts of it are on fire.

So far in 2020, the NYSE FANG+ index of giant technology stocks is up 78%. The
Renaissance IPO ETF,
an exchange-traded fund that holds recent public offerings, is up 84%. The
SPDR S&P Kensho Clean Power ETF,
which invests in renewable-energy companies, has gained 88%. 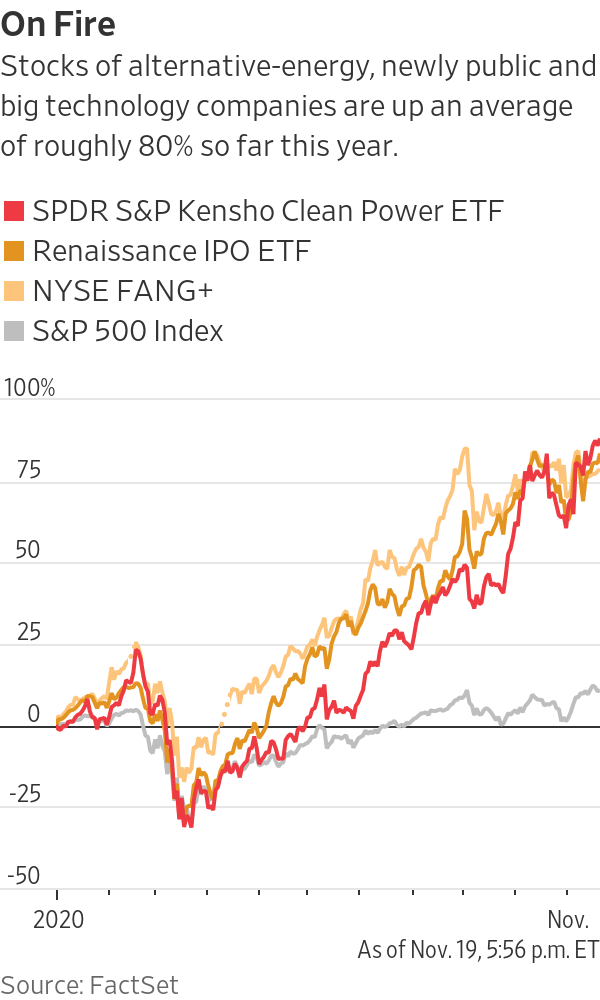 Meanwhile, the overall stock market is up almost 11%.

For years, anyone who thinks any financial asset is somewhat overvalued has called it a bubble. The financial use of “bubble” originated centuries ago to describe massive speculation that inflates market prices to the bursting point.

Financial bubbles have never had a formal definition, though, and they are diabolically difficult to identify without the benefit of hindsight. A new book, “Boom and Bust: A Global History of Financial Bubbles,” by finance scholars William Quinn and John Turner of Queen’s University Belfast in Northern Ireland, helps clarify the muddled thinking on the topic.

The image of a bubble is itself a misnomer. As any kid who’s ever chewed gum knows, bubbles often barely expand before bursting, and they don’t bother anybody much except parents and teachers.

Financial markets, however, can easily heat up fivefold or even 10-fold and then collapse at least 50% in a flash, burning millions of speculators and sometimes charring entire economies. Think of the U.S. after the stock market crash of 1929, or Japan 60-plus years later.

Rather than regarding overvalued assets as a bubble, we might consider them a fire. The more it expands and the hotter it gets, the more havoc it can wreak.

“Boom and Bust” looks closely at 300 years’ worth of market manias using the metaphor of “the fire triangle.” That image has long been evoked to explain the conditions necessary for flames to erupt and persist: oxygen, fuel and heat. Remove one, and you can prevent or put out a fire.

The oxygen of investing is marketability, or the ease of buying and selling an asset. Centuries ago, that meant carving up difficult-to-transfer corporate ownership into tradable shares. Nowadays it’s carrying a stockbroker in your pocket. With a smartphone-trading app, you can buy or sell so-called fractional shares in increments anyone can afford.

On popular trading apps like Robinhood, you can put as little as $1 in
Berkshire Hathaway Inc.’s
Class A shares, which cost about $345,000 apiece. You can trade that morsel of approximately 0.000003 shares commission-free.

The second side of the fire triangle, fuel, is manifested in financial markets by money and credit. Low interest rates make investing with borrowed money cheaper, while paltry yields on safe savings compel people to invest in riskier alternatives.

The third side of the triangle, heat, is supplied by speculation. When prices go up, more people buy, inflaming prices even more and attracting another rush of speculators.

That lures in naive buyers who think making money is easy. But hedge funds and other institutions also chase those hot returns, fanning the flames even higher.

The “Boom and Bust” book completes the metaphor by noting that the fire triangle has in recent years been updated with a fourth component, an “exothermic chain reaction.”

Marketability, credit and speculation are necessary, but not sufficient, to start and maintain a market fire. A fourth component, what the authors call a “spark,” is also needed.

Are you worried about overheated stocks? Why or why not? Join the conversation below.

That can come from new technology, government intervention or both. The stock-buying binge of the late 1990s was sparked by euphoria over the potential of the internet. China’s more-recent market booms have been stoked by government policies and propaganda.

“Boom and Bust” shows that most bubbles tend to be confined to a few stocks or industries.

That was true in 1824-25, when Latin American mining stocks listed in London rose more than fivefold in roughly six months, while British blue-chip companies lost almost a tenth of their market value. Again in London, in the 1890s, shares in bicycle companies more than doubled in a year even as major stocks went nowhere.

In 1999, with internet stocks going ga-ga, the tech-heavy Nasdaq Composite Index gained 86%. Without technology companies, the S&P 500 would have been up only 5%.

In proportion to market size—which weights giant tech stocks heavily—the companies in the S&P 500 recently traded at 21 times expected earnings over the next 12 months, according to Matarin Capital Management, an investment firm in New York. That’s about 24% higher than their average over the past quarter-century.

More from The Intelligent Investor

To counteract the effect of a handful of giant stocks, however, we can weight companies equally. In that light, the S&P 500 is at about 17 times expected earnings, roughly 10% above its long-term average. That implies that most stocks aren’t cheap—but are hardly overstretched.

I don’t see much cause for concern about overheating in relatively small areas like newly listed stocks, alternative-energy firms and shell companies formed to do buyouts.

The bigger worry is that a fire among a few giant stocks can set the neighborhood ablaze. After the technology-heavy Nasdaq index collapsed in 2000, the broader S&P 500 also tumbled.

Recently, smaller companies and cheap “value” stocks have started to show signs of recovery—which, if it persists, could reduce the market weight of blazing-hot giants like
Amazon.com Inc.
That might be the firebreak that this market needs.

Write to Jason Zweig at intelligentinvestor@wsj.com