U.S.-listed special-purpose acquisition companies, or SPACs, raised $82 billion in 2020, a more-than-sixfold increase from the year before and a figure greater than all of the money previously raised, according to Dealogic. They even attracted a star-studded group of backers, ranging from basketball legend

As celebrities and well-known institutions entered the sector, the biggest banks also increased their activity. Two—
Credit Suisse Group AG
and
Citigroup Inc.
—together accounted for nearly 30% of the underwriting, followed by
Goldman Sachs Group Inc.

A SPAC is a public firm that uses the money raised from an initial public offering to merge with another company, typically within a few years. That target company then gets the SPAC’s position on a stock exchange, allowing it to tap public markets. The pandemic has sparked a record run, with hot startups in areas such as electric vehicles and cannabis seeking to capitalize on investors’ burgeoning enthusiasm.

Banks find buyers for a company’s shares and backstop the stock price. In return, they typically get a fee of 2% of the money raised in the initial listing, then another 3.5% when the company completes its deal with the target. While those fees can be lower than the money that banks raise in traditional IPOs, Wall Street firms also can earn extra fees by advising a company on its SPAC deal or raising more money for the purchase.

The whole process can result in a windfall, explaining in part why the biggest firms on Wall Street are muscling into an area previously dominated by a small group of players, analysts said.
Morgan Stanley,
JPMorgan Chase
& Co. and
Bank of America Corp.
rose into the top 10 underwriters last year. Meanwhile, larger firms Credit Suisse, Citigroup and Goldman wrested the lead in SPAC underwriting from Cantor Fitzgerald & Co., which topped Wall Street in the category the previous two years and fell to fourth in 2020.

The spree was part of a broader capital-markets bonanza, through which companies issued huge amounts of equity and debt to make it through the pandemic. 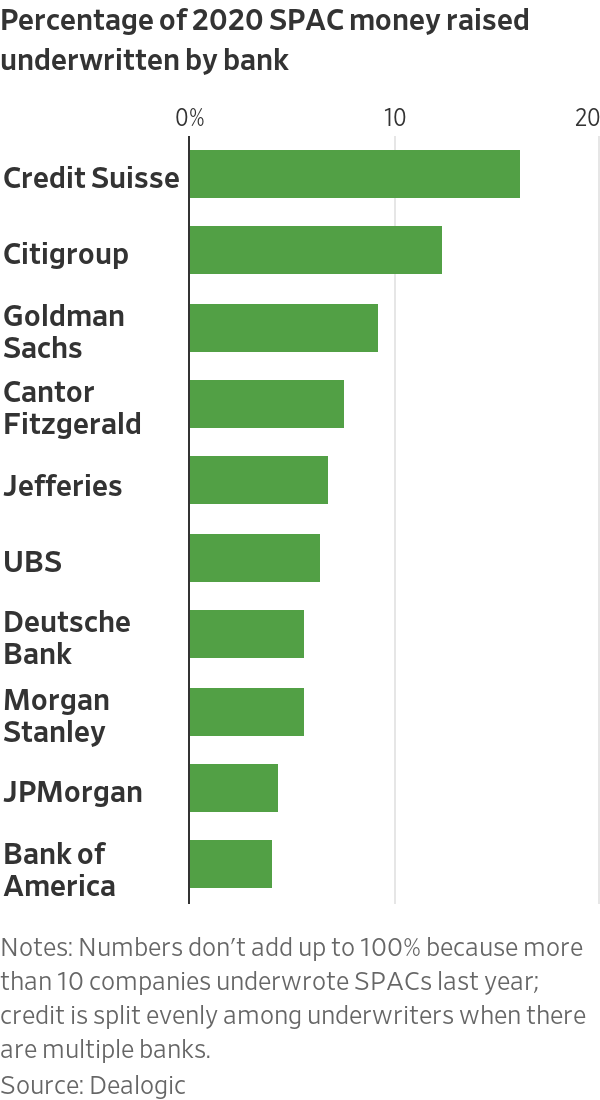 The rising underwriting fees have coupled with higher trading revenue to help keep big banks profitable, even as they set aside billions of dollars to cover future loan losses caused by the economic slowdown. Some analysts expect SPACs to keep contributing to that trend moving forward, driven by near-zero interest rates and recent gains in companies that went public through SPACs, including
DraftKings Inc.
and
Virgin Galactic Holdings Inc.

“This has really been a very helpful shot in the arm for Wall Street,” said

Executives at Goldman and Citigroup cited rising underwriting activity as a boost for their investment-banking businesses on their most recent earnings calls in October. Investors will get a look at how underwriting affected fourth-quarter profits when the largest lenders begin reporting results next week.

Ultralow interest rates make SPACs more appealing to investors by reducing the returns they can expect from safe assets like government bonds, pushing them toward alternatives. Investors also are drawn to SPACs because they have the option to redeem their shares, plus interest, before a deal goes through. And blank-check companies make it easier for startups to tout their long-term growth projections, due to regulatory differences between SPACs and traditional IPOs. 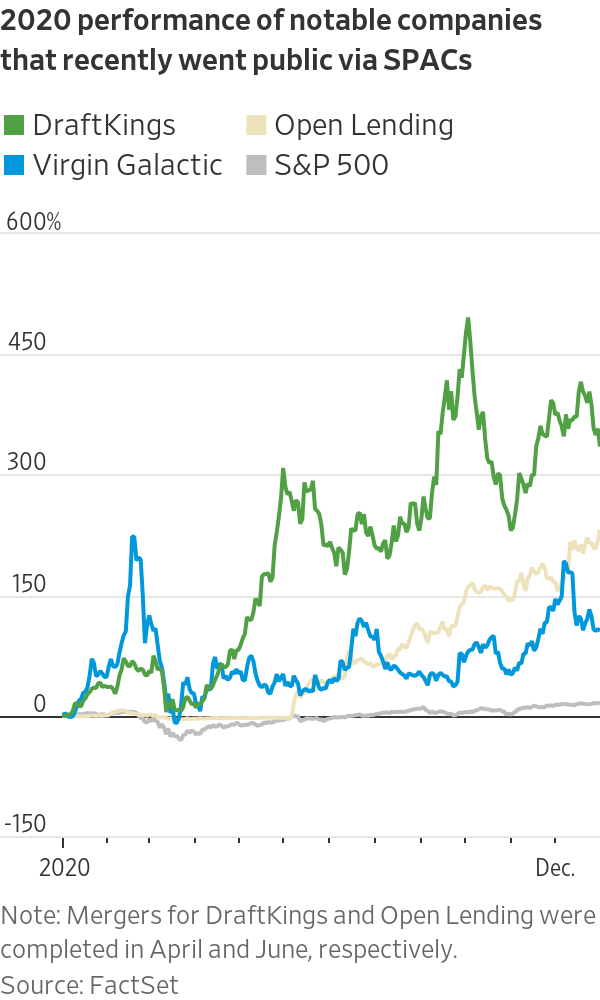 The surge in SPAC issuance highlights a reputational shift after these firms were associated with penny-stock frauds and dismal returns in the past. Their share of capital raised through all IPOs doubled last year to nearly 50%.

“If you’re an investment bank, you can’t ignore that,” said

Do you think the SPAC boom will continue into 2021 and if so, why? Join the conversation below.

Citigroup also has led SPACs run by a former banker at the company,

Credit Suisse, meanwhile, has been the sole underwriter for SPACs led by former
Facebook Inc.
executive and venture capitalist

Richard Branson
public. Two of his other firms were among the largest SPACs last year.

Private companies are flooding to special-purpose acquisition companies, or SPACs, to bypass the traditional IPO process and gain a public listing. WSJ explains why some critics say investing in these so-called blank-check companies isn’t worth the risk. Illustration: Zoë Soriano/WSJ

Virgin Galactic shares more than doubled in 2020, while sports-betting firm DraftKings added 335%, adding to excitement in the sector and pushing banks to bolster their SPAC businesses.

“Even the firms that wouldn’t touch the product a couple of years ago all of a sudden want to be part of the game,” said

Alysa Craig,
managing director for mergers and acquisitions and head of SPACs at Stifel Financial Corp.

Deutsche Bank AG
and Goldman were the underwriters of Diamond Eagle Acquisition Corp., the SPAC that late in 2019 agreed to merge with DraftKings. The executives behind Diamond Eagle, former MGM Holdings Inc. movie studio chief

Jeff Sagansky,
said recently they aim to raise $1.5 billion for a new SPAC called Spinning Eagle Acquisition Corp. If that company doesn’t use all of the money raised for an initial deal, it could use some of the remaining funds to spin off a new SPAC and pursue another deal.

Goldman is the sole underwriter for Spinning Eagle and has even added to the flurry of activity by launching a pair of SPACs itself in recent years.

“There’s a growing acceptance of this way of going public,” said